I use Twitter and Linked-In to direct readers to my blog, and bit.ly to track the clicks.  Twenty clicks is good.  Last week, in response to a question, I posted some calculations about an old television commercial in which a car is dropped from a helicopter.  That got 7,000 clicks.

My original paper is here.  So far, it has been downloaded over 1,000 times.  People are retweeting it around the world, and trolling me about terminal velocity.   Ordinarily, the only velocity I care about is how fast the car leaves inventory.  Drop one from the sky, though, and that’s popular.

I think it was a Chevy commercial.  They drop a car from 4,000 feet up, while another car races to pass the target before the falling car strikes.  This takes roughly 16 seconds.  It only works because the second car gets a running start.  It is already going 172 MPH when it reaches the starting line.

Such a car would be able to accelerate from zero to 60 MPH in 2.75 seconds.

The paper includes a table showing how they chose 4,000 feet based on the speed of the ground car.  Troll alert: the falling car does not reach terminal velocity until roughly 285 MPH, assuming 0.3 coefficient of drag. 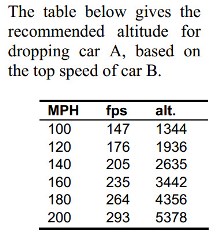 Back when this commercial was filmed, it was inconceivable that a car could beat gravity from a standing start.  Acceleration due to gravity, one “G,” is 21.8 MPH per second.  Released from the helicopter, the falling car reaches 60 MPH in 2.75 seconds.

Thanks to the instant torque available in electric cars, the newly announced Tesla model S P100D does zero to 60 in 2.50 seconds.  This is a lot of arithmetic (and a lot of Twitter clicks) to prove one thing: Tesla should remake the commercial.